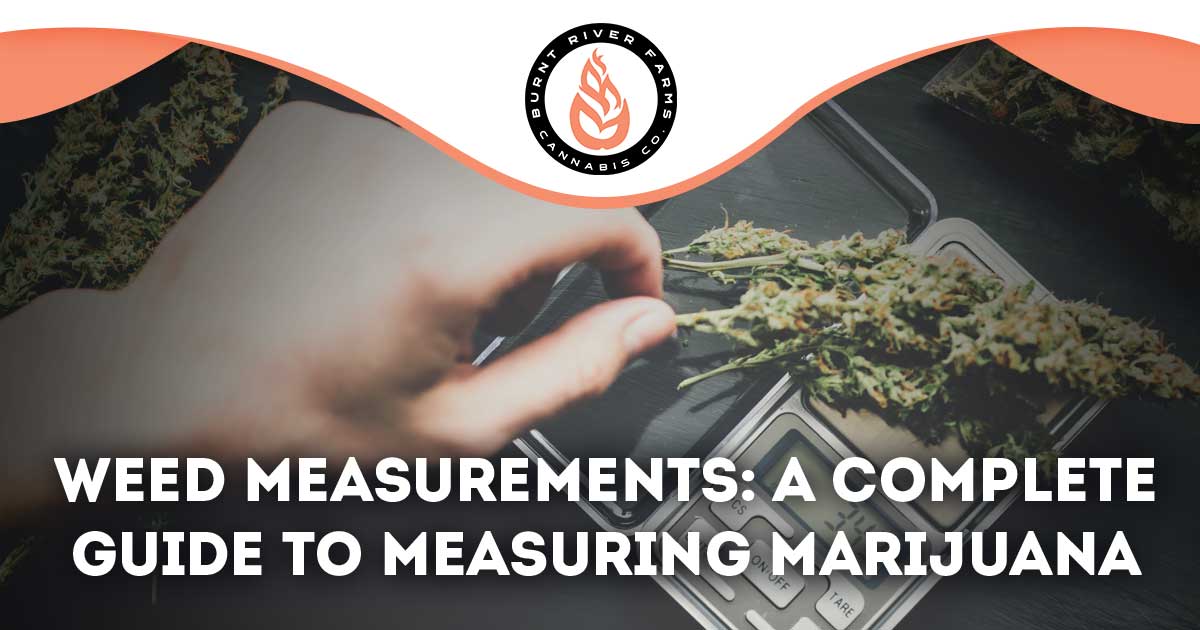 Marijuana legalization has brought cannabis sales from the black market into the spotlight. New buyers may find themselves overwhelmed by the various terms used for weed measurements. We’re here to make understanding the terms and slang used when purchasing various amounts of marijuana in this complete guide to cannabis measurement systems.

While cultivating and manufacturing in the cannabis industry has evolved greatly over the last 100 years, weed measurements in the United States have remained fairly consistent. The quantities sold in your local dispensary are very similar to those used during times of prohibition. Here are some of the most common weed measurements and terms people should know before they purchase marijuana for the first time.

Everything You Need to Know About Weed Quantities

Weed measurements begin on the low end of the metric system with grams, but then move into the imperial system for larger quantities. By understanding how quantity is related to weed cost then you can find a good balance between how much marijuana you plan on consuming and the price you pay. For example, buying an eighth of weed is usually significantly less than buying three grams on separate occasions. The more you buy, the less you pay per gram.

This doesn’t mean you should rush out and purchase as much marijuana as you can afford. Oftentimes, anything over a full ounce becomes quite expensive and is also above the legal limit within many states. It’s important to know what is legal in your area to prevent any legal problems.

Weed Measurements from Low to High

We’ll cover all of the slang terms and their actual weight from low to high to help you get a better understanding of cannabis quantities. This will help you understand how much you need to purchase for your preferred consumption method and how long you can expect it to last. Weight is typically measured on a digital scale for the most accurate weight reading. However, if you’re not familiar with weed amounts then you might not understand how much you’re really getting. We’ll translate weight into what you actively get from each amount.

From “Dime Bag” to Gram

The smallest weed measurement is what is commonly known as a dime bag. Most dispensaries have gotten away from selling dime bags because it is such a small amount. A dime bag is half a gram of marijuana and costs about $10, hence the name. However, this nickname originated before the legalization of weed. Dispensaries have actually driven the price of cannabis down from previous street prices so it’s now possible to get more for your $10 depending on the particular strains.

These days, it’s more common to see a gram of weed as the smallest amount at your local dispensary. Depending on how you roll, a single gram can make 2 or 3 joints. When you think of a gram, you might feel like that isn’t much at all. After all, it takes only 4 grams of sugar to equal one teaspoon. In reality, a gram of marijuana works out to be 1/28th of an ounce. Because of the lightweight, dried nature of marijuana, you’ll get more than a teaspoon. Regardless, a gram will easily fit into the palm of your hand. You can purchase a grab in a few ways. You can buy it in flower form. It’s also possible to purchase pre-rolled joints.

For many people, dime bags and dub sacs are one and the same. But the cannabis industry does see them as two distinct measurements. Traditionally, dub sacks are two grams of weed. However, this can change from area to area. The term refers to a $20 bag of marijuana. This of course varies on quality and location. It works out to be the size of two large cannabis nuggets. It’s roughly the size of five or so joints.

“An Eighth” of an Ounce

From purchasing a gram or two, the next unit of measurement is an “eighth” which is actually one-eighth of an ounce. This works out to be about 3.5 grams. Prices for an eighth vary depending on the quality of the cannabis. Most people use between an eighth and a quarter in a week.

An eighth is traditionally a little less per gram when compared to smaller measurements. There are a variety of nicknames used to describe an eighth of weed including: half a quarter, slice, cut, and eify. The cost typically ranges between $25-35. Depending on how you roll, it could leave you with 7 to 10 joints.

A “Quarter” of an Ounce to a Half

Commonly called a quarter, quad, or Q, this one is pretty basic. It’s a quarter of an ounce of marijuana, which is about 7 grams. Prices once again vary, with higher quality products coming in at around $50-70. A quarter ounce can work out to about 15 good-sized joints.

From a quarter of weed, amounts increase to a half-ounce, which is 14 grams of bud or 30 or more joints depending on how you roll. Half-ounce prices are around $100 to 120. This unit of measurement is also commonly referred to as half an O, half a zip, half-O, or a half-ounce.

People who use medical marijuana may decide to purchase these weed amounts depending on their prescription and dosage in order to not have to visit the dispensary often.

In most parts of the country, a full ounce of weed is the end of the road to meet legal requirements. Many laws state that it’s the maximum legal amount that a person can own at once time. An ounce is 28 grams which work out to be close to 100 joints. Prices can vary greatly on quality. You could pay anywhere from $150 to $280. Other names for an ounce of pot are O, O-zone, zip (because it often fills a whole Ziplock), or a lid. An ounce will last the typical cannabis user a month.

In some places, you may be able to purchase a quarter-pound, a half-pound, or full pound of weed. Pot costs continue to increase and vary greatly depending on exactly what cannabis flower bud you’re purchasing. It’s always a good idea to look into your local laws to see if there’s a limit on how much you can purchase at one time and also how much you’re allowed to possess at one time.

If you’re not sure about how much weed you need, you can always start with a little bit and work your way up until you find the amount that’s right for you. You may also look into purchasing other cannabis products such as edibles, cannabis oil, concentrates, butane hash oil, and more (some options may be available without THC).